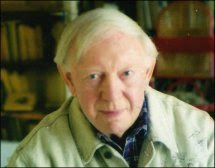 In 2004 he sent us a copy of No More Hiroshimas. He had originally collected together this volume of hia A-bomb poems in 1983, but it took twenty years before we published it 'as a real book'. James recounts 'My A-Bomb Biography' in his preface.

Here are the opening lines of the title poem, No Mor 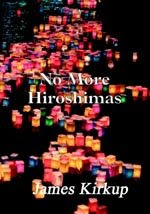 At the station exit, my bundle in hand,
Early the winter afternoon's wet snow
Falls thinly round me, out of a crudded sun.
I had forgotten to remember where I was.
Looking about, I see it might be anywhere -
A station, a town like any other in Japan,
Ramshackle, muddy, noisy, drab; a cheerfully
Shallow impermanence: peeling concrete, litter, 'Atomic
Lotion, for hair fall-out', a flimsy department store;
Racks and towers of neon, flashy over tiled and tilted waves
Of little roofs, shacks cascading lemons and persimmons,
Oranges and dark-red apples, shanties awash with rainbows
Of squid and octopus, shellfish, slabs of tuna, oysters, ice,
Ablaze with fans of solied nude-picture books
Thumbed abstractedly by schoolboys, with second-hand
looks.

There will shortly be a memorial event for James Kirkup in his home town of North Shields.