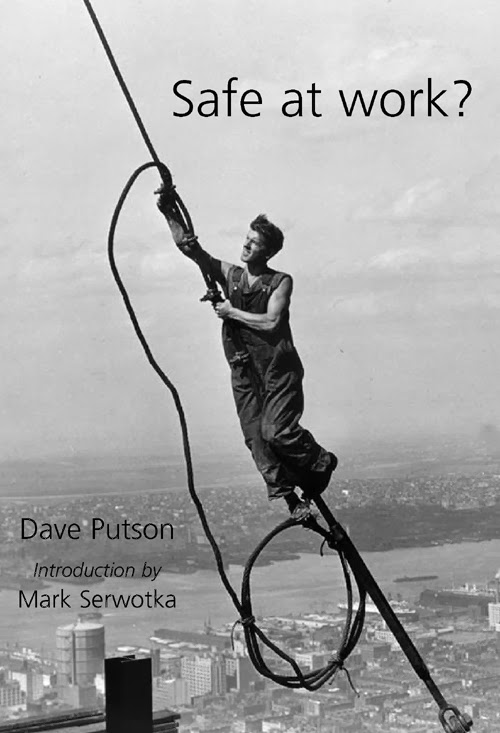 How many times have the tabloid headlines screamed: ‘Health and safety gone mad!’
The idea that the rules governing our health and safety are an ‘albatross around the neck of British businesses’, as David Cameron announced recently, gives a clue to the reasoning behind the media offensive.


Dave Putson’s book, Safe at Work? is a welcome riposte. Putson, a health and safety rep for London courts, traces the development of health and safety legislation, from the campaign to eradicate ‘phossy jaw’ suffered by Victorian match women and legal disputes over compensation, to the role of factory inspectors.


Before the comprehensive 1974 health and safety legislation, there was carnage across industry, with death and serious injury at work commonplace. The new laws were an important breakthrough, yet the number of people who still lose their lives or contract serious illness is frighteningly high – in 2012-13 some 148 people died at work.
Safe at Work? cuts through the fog of misinformation.


The book has an introduction by Mark Serwotka, general secretary of the Public and Commercial Services Union.
Review by the Bookmarks socialist bookshop. Appears in Labour Research (November 2013). Order Safe At Work? at www.bookmarksbookshop.co.uk or from Spokesman books at www.spokesmanbooks.com.

Sathish Kumar said…
Great Info!!! Thanks for sharing information with us. If someone wants to know about Safety Software and EHS Software I think this is the right place for you.
August 21, 2019 at 3:03 AM

June 07, 2016
In his autobiography The Greatest: My Own Story , Muhammad Ali recounts how Bertrand Russell got in contact with him, and their ensuing correspondence: *** For days I was talking to people from a whole new world. People who were not even interested in sports, especially prizefighting. One in particular I will never forget: a remarkable man, seventy years older than me but with a fresh outlook which seemed fairer than that of any white man I had ever met in America. My brother Rahaman had handed me the phone, saying, ‘Operator says a Mr. Bertrand Russell is calling Mr. Muhammad Ali.’ I took it and heard the crisp accent of an Englishman: ‘Is this Muhammad Ali?’ When I said it was, he asked if I had been quoted correctly. I acknowledged that I had been, but wondered out loud, ‘Why does everyone want to know what I think about Viet Nam? I’m no politician, no leader. I’m just an athlete.’ ‘Well,’ he said, ‘this is a war more barbaric than others, and because a mystique is built up
33 comments
Read more

April 07, 2014
Tate Liverpool: Exhibition 28 February – 11 May 2014 Adult £8.80 (without donation £8) Concession £6.60 (without donation £6) Help Tate by including the voluntary donation to enable Gift Aid Keywords: Art, Culture and Society in 1980s Britain , is a new take on how the changes in the meaning of words reflect the cultural shifts in our society. This dynamic exhibition takes its name and focus from the seminal 1976 Raymond Williams book on the vocabulary of culture and society. An academic and critic influenced by the New Left, Williams defined ‘Keywords’ as terms that repeatedly crop up in our discussion of culture and society. His book contains more than 130 short essays on words such as ‘violence’, ‘country’, ‘criticism’, ‘media’, ‘popular’ and ‘exploitation’ providing an account of the word’s current use, its origin and the range of meanings attached to it. Williams expressed the wish some other ‘form of presentation could be devised’ for his book, and this exhibition i
84 comments
Read more

November 18, 2015
Another featured article from the latest issue of The Spokesman comes from the 2011 edition of J. A. Hobson's Imperialism . Jeremy Corbyn penned the book's foreword, which we reprint here under the title 'Internationalist at Work'. As a separate point of interest, we also include this comparative image of the logo of publication The Week, circa 1960s, and Corbyn's recent campaign logo. Cut from the same cloth ?  Internationalist at Work J. A. Hobson wrote his great tome at a different age. His thoughts were dominated by the zenith of the British Empire and the Boer War. The outcome of the war demonstrated Britain’s then ability in sustaining global reach, since Elizabethan times, but also its extreme vulnerability. At home the poor physique of working class soldiers led to Haldane’s investigation into working class health and living conditions. The difficulty in containing the rebellious Boers, and the huge opposition to the war, encouraged furt
18 comments
Read more