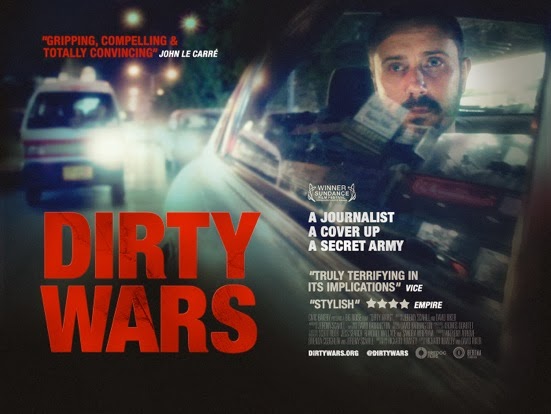 I'm proud to be a producer of this film, many years in the making, which has received critical acclaim in the United States as well as a wide theatrical US release this summer, on more than 150 screens.

In late November and early December, I'll be joining Jeremy Scahill, a producer and writer of the film, as well as author of the bestselling book of the same name (Serpent's Tail, May 2013), Brenda Coughlin, my coproducer, and director and editor Rick Rowley, for a launch tour of the film. We're also partnering with our allies at Reprieve UK and with other organizations, journalists, and advocates for the launch tour.

Tickets are now available for the theatrical run at Picturehouse Cinemas, starting with the premiere at the Ritzy Brixton on Friday, 29 November, with Jeremy there in person for an audience discussion after the showing. Brenda and I will be there, as well.

We'll also be at other London venues and in theaters in Bath, Brighton, Cambridge, Edinburgh, Exeter, Liverpool, Oxford, and York. We hope to add other theaters soon.

Information and tickets for the theatrical release can be found here: http://bit.ly/181mjdn

Reporting on a US night raid gone wrong in an Afghan village, journalist Jeremy Scahill discovers a cover-up by an elite military unit. What follows is an international investigation into America’s expanding covert wars.

'One of the most important political films of the last 20 years.' - Glenn Greenwald

'Truly terrifying in its implications.' - VICE

'Plays out like a classic conspiracy thriller following a trail of clues to the heart of darkness.' - TimeOut UK (4 stars)

Rida Kismayenti said…
Great article, thanks for sharing! Do not forget to come back to my blog. Indonesian bloggers greetings :)
April 26, 2015 at 12:56 PM

Chemical said…
I am Jerry Will, Technician by profession working in Mercury Chemical Consultant Group Indian Branch. We manufacture and sell all materials used in treating and cleaning of any type of defaced currency, pounds, cfa france, euros dollars and other currencies. We offer machines to do the big cleanings and we do delivery of products to buyer’s destinations. Contact if required! Mobile:+919582948275/techjerry007@gmail.com

Ncepboink said…
Nice article, thanks for sharing! Don't forget to berkunjungkembali to my blog.
March 2, 2018 at 4:41 AM