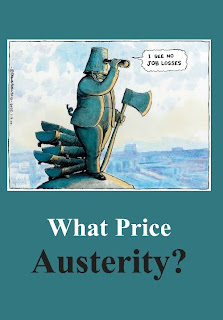 The Spokesman 110
Edited by Tony Simpson

‘Whilst still in opposition, in August 2009, the then Shadow Chancellor, George Osborne, argued for what he called ‘progressive’ and ‘fundamental’ reform of public services. The alternative, according to the Chancellor in waiting, was ‘deep cuts in the quality of those services’. Praying in aid Tony Blair and Alan Milburn, who were by then advocating something similar, he said that what was true ‘in the years of plenty’ was doubly true in an age of austerity.

Now installed, Chancellor Osborne has set about his austere task with a will. As the comprehensive spending review looks to slice further tens of billions from departmental budgets, the cuts are already scything through public services round the country. Local government workers in their tens of thousands have received Section 118 redundancy notices, as have their counterparts in the Civil Service and sundry quangos. Public service, and all its outworks, is being chopped hard. Osborne shows little awareness of how adversely his cuts impact the private sector. The likelihood of a double-dip recession, not to say a full-blown slump, seems to worry him hardly at all.’

Tony Simpson, from his Editorial
CONTENTS:
Tony Simpson - Editorial: What Price Austerity?
Mark Serwotka - Not a single job has to be lost
PCS - There is an alternative
Stuart Holland - Demythologising 'Old Labour'
Brian Jones - Failing Intelligence
Hans von Sponeck - Scared of the facts
Caroline Lucas MP - Afghanistan - Nail the Myth
Bertrand Russell - Prevent the crime of silence
Richard Falk and David Krieger - The Middle East
Rep. Dennis Kucinich - What we have to do
Carmel Budiardjo - West Papua's Plight
Jimmy Reid - We're not rats
Michael Barratt Brown - Is there not an alternative?
Stuart Holland - Act and Survive