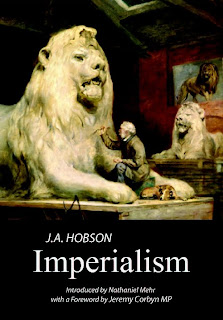 This January, Spokesman Books will be re-publishing J.A. Hobson's 1902 classic Imperialism: A Study. Hobson's book was among the first to explore the links between political economy and imperial expansion. It inspired a number of Marxist critiques of imperialism, and was quoted extensively in Lenin's famous pamphlet, Imperialism: The Highest Stage of Capitalism.
The new edition will feature an introduction by Nathaniel Mehr and a foreword by Jeremy Corbyn MP. At the event Jeremy Corbyn and Nathaniel Mehr will be joined by Professor Alex Callinicos, who has written extensively on economics and imperialism, to discuss the significance of Hobson's book in today's world.