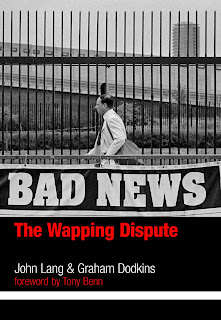 
Bad News – The Wapping Dispute tells the poignant and timely story of an ordinary group of people who were thrown into extraordinary circumstances, and the effects these circumstances had on their lives.

By Graham Dodkins and John Lang

Published by Spokesman on 1st May 2011

On 24th January 1986, some 5,000 workers employed by four of Britain’s national newspapers were sacked: The Sun, News of the World, The Times and The Sunday Times were owned by Rupert Murdoch’s News International Limited, and the bitter industrial dispute that followed was to last 13 months.

As the 25th anniversary of the dispute nears, Bad News – The Wapping Dispute is published at a time when there is renewed public anger at a Conservative-led government, and unemployment, police handling of demonstrations, and Rupert Murdoch’s hold over the British press and media dominate the headlines.

"The way to Dock Street was along narrow, cobbled streets between imposing Victorian warehouses. It was dark and deserted, except for the police... The News International complex was a disturbing sight: Huge, square buildings bathed in orange-yellow floodlights and surrounded by high spiked railings topped with razor-wire. Surveillance cameras peered over the top....."


In the year following the strike the authors of this book, themselves previously librarians at The Times and The Sunday Times and active participants in the dispute, interviewed many of the clerical workers involved in an effort to document their experiences.

Having spent more than a year recording these testimonies and transcribing the tapes onto the backs of discarded fast-food delivery menus using a portable typewriter (money was tight and paper expensive), the project was reluctantly abandoned, the victim of an acute need to earn a living.

The manuscript gathered dust in a loft until, in 2009 (with the 25th anniversary of the dispute fast approaching) unemployment, ironically, provided an opportunity to finish the job.

Tony Benn says: "What comes out in this book is the courage and determination of those who fought for their jobs and their rights against a government that was bitterly hostile to both. But more important than that, this book is being brought out at a time of renewed attacks which has also produced a strong and broad campaign by those who would suffer if the cuts went through. It is relevant to those in current struggle and will I am sure give them encouragement. This is a book that should be very widely read"

Graham Dodkins was a Times/Sunday Times Librarian, sourcing information for journalists and the general public, when the dispute began and was a member of the Society of Graphical and Allied Trades Clerical Chapel. Like many others, he was a foot soldier, picketing News International buildings, attending meetings and taking part in demonstrations. As time went on, he developed a facility for public speaking and edited Hard Times, the Chapel newsletter. The publication of his book Working Boats, which chronicled the demise of commercial carrying on Britain’s canals and its effect on the families that lived and worked on the boats, coincided with the end of the dispute. He later worked as a local authority Sports Development Officer and managed a long-term project for disadvantaged young people at West Ham United Football Club and across the East End of London.


John Lang worked as a librarian in the Business News section of the Times/Sunday Times mainly collating and supplying information for the journalists. He was actively involved in the trade union and was Deputy Father of the Chapel of the SOGAT clerical chapel. At a very early stage of the dispute, he became the acting Father of the Chapel for the clerical chapel, and was appointed Support Group Co-ordinator on behalf of the strikers. As well as the numerous meetings with strikers and union officials, he spoke regularly at meetings that had been organised by supporters of the strike across the country and attended the demonstrations and picketing at the News International buildings. A few months into the dispute, he was elected as a local councillor in the London Borough of Newham. Since the dispute ended, he has worked as a Housing Officer for a local authority, set up and managed a comedy club, worked for a project supporting asylum seekers and spent around a year backpacking in various countries. He is currently employed as a Maintenance Manager for an arts organisation which provides studios for artists.

nicoatridge said…
I didn't get round to providing the book any photos unfortunately (although I am the unacknowledged author of the map), but i have now got round to scanning a load of negs of the dispute at http://www.oatridge.co.uk/wappingdispute.