Missile offence at sea: protest fasts in US and Korea 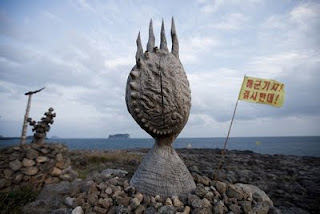 Coastline of Gangjeong village on Jeu Island ... imagine these rocks covered with cement 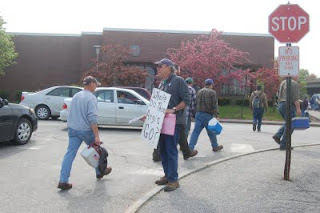 At BIW yesterday as workers left the shipyard

I was able to hand out six leaflets yesterday as the hundreds of workers walked past me and hundreds more drove past my little spot on the corner in front of Bath Iron Works (BIW).

I plan on going back again today, and every weekday, as long as I continue with this fast (now 3rd day) in support of the extraordinary people of Gangjeong village on Jeju Island.

They build the Navy Aegis destroyers at BIW that are outfitted with missile offense systems and will be deployed at the base on Jeju Island and at other bases in the Asian-Pacific thus forcing China to expand its military in response.

I am grateful to Dennis Bernstein at KPFA in Berkeley who yesterday interviewed me about this story. I was touched by the sincerity of Dennis about Professor Yang Yoon-Mo who today is on his 51st day of hunger strike. You can hear the interview here.

Global Network board member MacGregor Eddy (Salinas, California) is working non-stop to create Facebook support for Yang, fellow GN board member Sung-Hee Choi (who is now on her 7th day of hunger striking while in jail), and the seven other villagers now in detention. It appears that the Navy has picked out many of the key leadership of the non-violent resistance to the base construction and put them in the slammer. So this is where we all come in - we have to internationalize this struggle in order to pick up the slack.

Last night I had an email from one of our supporters here in Maine. He told me he had called the South Korean embassy in Washington DC and they told him he had to call Boston to lodge his complaint against the treatment of the Gangjeong villagers. So when he called Boston the person there said they knew nothing about the Jeju story. It seems to me that the South Korean embassy in Washington must be getting tired of the phone calls and are trying to divert and frustrate those who are making the call. I take this as a good sign that they are trying to deflect the growing public support.

If you haven't yet watched the video interview with Professor Yang you must do so and help us get others to see it as well. More than 6,400 have seen it since it got posted on May 20. You can see it here.

Keep checking my blog for regular posts about the situation on Jeju Island. Your support is urgently needed and appreciated.