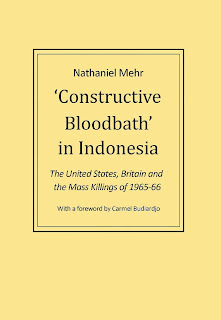 In 2009, Spokesman published 'Constructive Bloodbath' in Indonesia: The United States, Britain and the Mass Killings of 1965-66 by Nathaniel Mehr, with a foreword by Carmel Budiardjo.

Historian Gabriel Kolko described the book as "EXCELLENT ... MUCH NEEDED".

Now, a contact in the United States strongly recommends THE ACT OF KILLING, a movie set against the background of these terrible events.

'Constructive Bloodbath' in Indonesia is available to buy from our website.