Latest update from The Paragraph

May 15, 2015
Based in Athens, The Paragraph offers an informed and humorous perspective on Greek and Global affairs, born of a longstanding relationship with the Russell Foundation (the 'Northern Garrison'). Here we re-blog an abridged version of Theo Iliadis' latest bulletin, published on the 70th anniversary of VE DAY.

We hope you are all doing as well as possible in the 'interesting times' we are living in, on a global scale. As you know, The Paragraph has been out of circulation for some time, but today we thought that we should not let this joyful and thought-provoking anniversary pass without sending you all a Special Issue, together with our heartfelt wishes for all that is good in life.
Hence we congratulate our dear Paragraph friends and readers of all nationalities, on the 70th Anniversary of the Allied Victory against Nazism. The anniversary of what is known the West as VE Day (Victory in Europe Day), and in Russia simply as Victory Day (in a war Russians call The Great Patriotic War), signifies a major victory of mankind against (man-made) forces of darkness, wanton animosity, destruction, and unbridled hatred.
In this Special Issue please find attached:


book review of Prof. Sakwa's recent book Frontline Ukraine: Crisis in the Borderlands (also PDF, see page 96) - the article is an excerpt from this book*


Finally, a (longish) personal note, including some personal experiences on the occasion:

A week ago I was in the War Museum in Athens, in a festive cinematographic event organised jointly by the Greek MoD (Ministry of Defence), the Municipality of Athens and the Culture Centre of the Russian Consulate here. Uniformed young privates of the Greek Army were distributing the celebrations programme; this was only one of many in a series of events organised in Athens for the Anniversary. On the Programme was the logo shown below. I was deeply moved – and felt almost disbelief – seeing young Greek soldiers on this duty! 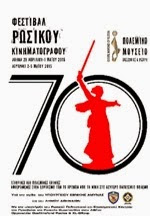 As I said, there were many more events, including an evening in the Megaron Moussikis (Music Hall) this Monday, when the band of the Greek AF and Greek and Russian singers gave an excellent performance. In contrast to the evening in the War Museum – but true to the form of The Great Patriotic War – this event started… Disastrously (on the PR front). Simple enough: the organisers had a hard time in managing the rapid distribution of the (free) invitations.

I noticed that, when one was trying to help overcome the mess, even if ‘skipping the hierarchy’, and taking initiatives – which I dared do both – they did not react in a typically Greek way, e.g. 'Who do you think you are, pal?' Very patient... Took time to change course, but in the meantime were saying 'We know you want to help but it will not work', etc. And this is an important point. Such calm I remember only from some Anglos. In a nutshell, the communication on the emotional level was unselfish.

So after initial difficulties and heavy losses on the PR front, and again true to the spirit of The Great Patriotic War, as soon as the concert started and the tunes were in the air both the co-ordination and atmosphere got better and better, and the night culminated truly triumphantly! In addition, I must write that during the second part – Greek songs – Theodorakis pieces immortalising the plight of the concentration camps were prominent, plus Manos Hatzidakis 'Tsamiko', and lots more of good music.

In the closing phase, apologies were promptly offered from the podium to the audience (still half of us standing) for initial organisational problems. Then short closing speeches, and then the National Anthems. The enthusiastic and moved audience sang – standing, all of us – the Ode To Freedom, our National Anthem.

Finally, as an overdue honour, and this regardless of future developments in foreign affairs, etc.: Kudos to the SYRIZA-ANEL government, and all participants and co-organisers for having the grit and courage (especially under the current heavy politico-economic ‘friendly fire’ by our 'partners') to take part and co-organise such unforgettable events, commemorating our common Great Victory on behalf of all humanity.
So – to all of you in East and West – our heartfelt wishes and congratulations for Dem Pobiedy – Victory Day!
День Победы, Den Pobiedy!
https://www.youtube.com/watch?v=b-0ut0uXZW8

Strength and Honour,
The Paragraph staff

[* Our heartfelt thanks to our dearest 'Northern Garrison', our friends at The Spokesman and The Bertrand Russell Peace Foundation (BRPF) for their very rapid response in sending us the PDF of the article and the book review, especially since this issue had just circulated! The idea of sending you Prof. Sakwa's article with this newsletter came to us a bit late – at noon today; we had just received The Spokesman and read the article on May 7th. We rushed to our Briton friends, and they, steady as a rock ('always do it this way'!), rushed to respond. If reliability had a last name, it would be BRPF!

It is important to note here that Prof. Sakwa is of Polish descent, and that his father had fought with the Polish brigade of the 8th Army in El-Alamein and Monte Cassino; he had lost comrades-in-arms in Katyn. Hence his informed opinion on the Ukraine affair is also of great moral significance and personal objectivity, I believe.]