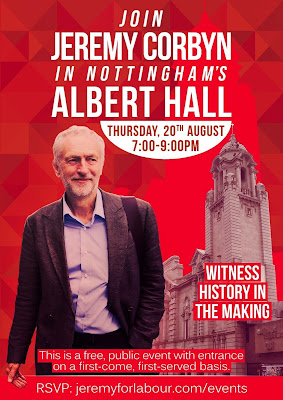 Alongside Jeremy Corbyn MP, speakers will be Richard Murphy, Manuel Cortes, Annmarie Kilcline, Tony Kearns, Nadia Whittome and Umaar Kazmi, with chair Cheryl Butler. Due to the high level of interest in this event, an early arrival is advised.

Online event pages for the rally can be found on Corbyn’s campaign website (http://www.jeremyforlabour.com/rally_for_corbyn_nottingham) and on Facebook (https://www.facebook.com/events/1040901972596312/).

Spokesman Books invites readers to revisit J. A. Hobson’s Imperialism (2011 edition), for which Corbyn penned a foreword. The following thoughts are taken from his contribution:

Reading Hobson’s works now, at the end of the first decade of the twenty first century, and acknowledging all that has happened in the huge sweep of imperial and post colonial history, he deserves enormous credit and recognition … [He] proclaimed against the absurdity and inadequacy of empire. In this era we need sustainability and justice. Neither is possible in an ideology committed to aggrandizement of wealth. A century ago, Hobson analysed the motive force of Empire in an era of uniforms, deference and unnecessary respect for power and authority. That ideology has been replaced by an obsession with money and exploitation, and it is just as pernicious and equally dangerous for the future.

Imperalism by J. A. Hobson is available from Spokesman Books in two formats: paperback and eBook. Please refer to our website: http://www.spokesmanbooks.com/acatalog/History.html

Alby Lutfy said…
This article is very bermafaat for me, I will bookmark this ebsite and I will always check out the latest information here. if there is a chance please visit fotocopy murah jakarta Thank you
September 9, 2015 at 12:24 AM