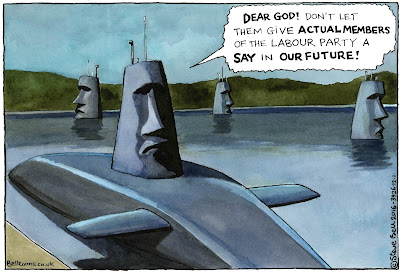 During 2016, the debate about Trident has great salience as the British government seeks parliamentary approval for its intention to build four new 'Successor' submarines to replace the ageing and increasingly decrepit Vanguard Class (see Substandard, Spokesman 129). This is a hugely expensive and technically challenging programme, vulnerable to cost overruns in a similar way to the programme to build the smaller Astute attack submarines at Barrow-in-Furness in northern England. Have such lessons about costs really been learned?

'So far as may be lawful' - Len McCluskey