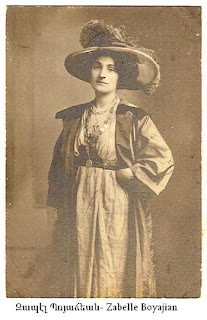 Residing in London in early 1900, Zabelle studied at Slade School of Fine Art. She becmae the author of the first play in the English language, Gilgamesh, a Dream of the Eternal Quest, published in 1924, based on the Sumerian epic poem, Gilgamesh, of the second millennium BC.

Zabelle's mother, Catherine, was a kinswoman of the poet Samuel Rogers (1763-1855), and of the Egyptologist Samuel Sharp (1794-1881). Zabelle's father was Thomas Boyajian, the British Vice Consul in Turkey (victim of the Hamidian genocidal massacres of 1894-1896).

After the world was engulfed in the total war of WW1, culminating in the Genocide of the Armenians in 1915, Zabelle fought back by publsihing, in 1916, her Armenian Legends & Poems - another first in the English language. Soon, the noted Shakespeare scholar Sir Israel Gollancz invited her to contribute a poem - which she did - commemorating the tercentenary of the Bard's death, in a book he edited, titled, Book of Homage to Shakespeare, published in late 1916. Hence, ZABELLIANA in 2016.