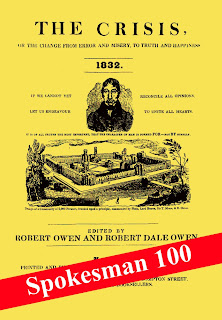 Democracy Growing or Dying?
The Spokesman 100

This is the hundredth number of The Spokesman, so we are expected to have a birthday party. Nostalgia is in order at such events, and we have accordingly devoted quite a large part of this number to reproducing articles and features which involved us, with many of our readers, in a variety of campaigns to change things for the better. Sometimes these have succeeded, if only, say the sceptics, in provoking our old antagonists to find new ways to make them worse again.

Sometimes they have failed, only to stiffen our resolve to try again, when times may be more propitious for their success.

There are, of course, a number of key concerns which have continuously preoccupied us. There has been no possibility of forgetting, even temporarily, the desperate urgency of the struggle for peace and disarmament. It has been quite possible, but very regrettable, to forget the struggle for the widening and deepening of democracy, and this possibility has been amply brought into evidence by the progress of sundry statesmen, not to say less elevated tribunes of the people, some of whom have opted for popular emancipation, one at a time, me first.

This kind of apostasy does discourage people, if only temporarily. If hope springs eternal, so too does the aspiration for effective power over the terms and conditions of our own lives.

Politicians commonly tell us that the major social struggles are about power. ‘We need’ they say, ‘power to prevent the next war, or to save the environment from destruction, or to protect people from exploitation and domination.’ That is one way of putting it, but there are dangers wrapped up in it. Power does not come sanitised, prepacked only for good causes. Time and again there is contrary evidence. What we really need is the annulment of power, so that none can make wars, burn the atmosphere, or lower the people into misery. Yet if we are to avoid the charge of piety, toothless anarchism, empty promises, then we have to concede that the first step to a higher freedom requires that we learn the necessary arts to stop the various evildoers who breed for us all these wars, depredations and oppressions. But if such steps are truly to lead upwards, then the higher freedom itself must always remain in mind.

Fittingly, we have chosen a number of contributions by our founder upon which to thread the thoughts of our contributors on these matters. Bertrand Russell reviewed one of our books, Max Beer’s History of British Socialism, when it first appeared shortly after the First World War. He highlighted Beer’s acute perception that the English establishment could vainly attempt to school their people in the rites of caution and conservatism, but ‘in periods of general upheavals … the English are apt to throw their mental ballast overboard and take the lead in revolutionary thought and action. In such a period we are living now’. After a long and depressing lull in their energies, it could be that we may be about to see their strong renewal very soon ...