The Fight In Britain Against Privatization: Lessons for Us All 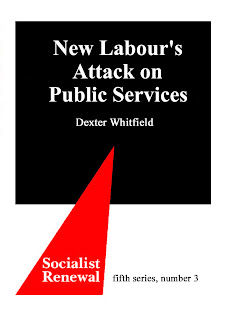 A view from the United States
by Mike Tolochko

“Marketisation and privatisation is more advanced in Britain than any other European country. The precise application of these policies will vary between countries for political, legal and cultural reasons. Nonetheless, there are key lessons from the experience in Britain which should be drawn upon.”

Dexter Whitfield has given activists around the world a true primer on the ravenous, greedy attack on human services in general, but for health care in particular. His point-by-point description of the neo-liberal policies demanded by the International Monetary Fund, the World Bank and the World Trade Organization as they apply on-the-ground is nowhere else to be found. He is describing the situation in Britain, a country which has had the longest Labour Party run in the party’s history.

The Tory governments of Margaret Thatcher/John Major did major damage to the public sector’s infrastructure. And, their financing schemes have lasted long after they were voted out of office by very large percentages. The problem is that the Tony Blair Labour Party continued many of the privatisation schemes started by Thatcher/Major. Their supporters voted for a far different direction.

The US experience with Bill Clinton and his reactionary free trade agreement, NAFTA, and his equally reactionary anti-welfare revision, are our case in point. The lesson: beware of your friends.

Whitfield defines the enemy:
1] Commodifying [commercializing] services are changed so that they can be specified and packaged in a contract, thus extending outsourcing and offshoring;
2] Commodifying [commercializing] labour – the reorganization of work and jobs to maximize productivity and assist transfer to another employer;
3] Restructuring the state for competition and market mechanisms – schools, hospitals and other facilities are compelled to compete against each other, funding is changed to follow pupils and patients, public bodies are reduced to commissioning functions creating opportunities for private finance and so-called partnerships;
4] Restructuring democratic accountability and user involvement – service users are treated as consumers; services and functions are transferred to quangos {see note}; arms length companies and trusts and privately controlled companies are established within public bodies;
5] Embedding business interests and promoting liberalization internationally – business is more involved in the public policy making process and promotes national, European and global liberalization of public services.

While Whitfield’s definition is Britain and European specific, it is quite easy to extrapolate to the U.S. situation. He makes the extremely important point that marketisation is not just the immediate impact on services, “It has a fundamental impact on local government, democratic accountability and the welfare state.” He goes into this aspect deeper in a later chapter of his book.

The brilliance of Whitfield is that he forces readers to understand the context of local, state and national privatization. “Neoliberalism is a conservative economic philosophy which revived in the late 1970s following the crisis in Keynesian economics, escalating inflation at the end of the post-war reconstruction boom, the soaring cost of the US war in Vietnam and the 1973 oil shock.” If this sounds familiar to the Iraq War and the present 2008 Oil Greed Crisis, it should.

He cites eight components to Neoliberalism:

“Liberalisation and competition---free trade and competition to determine who delivers services. Acceptance of globalization as a benign force and facilitating the internationalization of free inward and outward flows of money, goods, services and labour; Markets – a belief in the superiority of markets in allocating resources and organizing the economy; Deregulation of Financial Markets – permitting the free flow of capital globally and new opportunities for accumulation; Reconfiguring the role of the state – abandoning demand management, reduced intervention, restructuring and reorganizing service delivery by limiting the role of government to commissioning, coupled with withdrawal of public provision….;Privatization – of public assets and services, governance and democracy and the public domain; Consumerism – restructuring public services and the welfare state towards consumerism, individualism and personalization, shopping for services and the pursuit of self-interest, and the erosion of public, collective and community services; Labour market flexibility and deregulation – abandoning interventionist strategies to maintain full employment, expansion of casual and migrant labour, limiting trade union organization and activity, and reinforcing management’s ‘right to manage’; Increasing the power of business coupled with erosion of democratic accountability and transparency – partnerships, decentralization of functions but centralization of policy, depoliticalisation of civil society and voluntary organizations drawn into service delivery, citizens treated merely as consumers despite neoliberal rhetoric of participation and empowerment.”

Reading Whitfield is like stealing the playbook of Corporate American think tanks like the Brookings Institute. And, given our two political parties, both of which are more than willing participants, the next period of time will probably not change things too much. It certainly could get a lot worse if the Bush years are continued, regardless of who is in the White House.

Whitfield doesn’t leave us at death’s door with no mobilizing game book of our own. He directly states why public provision of services is essential:

And, then he describes “Strategies to oppose marketisation and support alternative policies.” He lists then describes 6 strategies:
1] political support;
2] Mobilise against;
3] Coalitions and alliances;
4] Intervene in modernization process;
5] Promote alternative policies;
6] Prevent the extension of marketisation through the European Union and World Trade Organization.

Whitfield includes a welcome quote from Harold Pinter, the great British playwright activist and leftist from his Nobel acceptance speech. Pinter said that politicians “are interested not in truth but in power and in the maintenance of that power. To maintain that power it is essential that people remain in ignorance, they live in ignorance of the truth, even the truth of their own lives. What surrounds us therefore is a vast tapestry of lies, upon which we feed.”

Books like Whitfield’s give us the ammunition to continue and increase the fight back.