A Special Relationship ... with Truth? 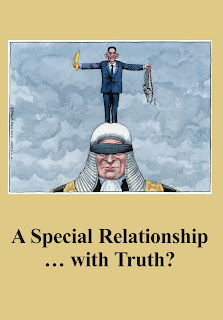 
‘… If one studied official American military doctrine, one could be excused for failing to find any relationships, anywhere, but those of subordination. ‘Full Spectrum Dominance’ is still the official credo of the American military-industrial complex, and there, it might be thought, is an end of it. But Britain is perhaps unique among the dominated in seeking actually to celebrate its subordination. That is why it was so refreshing to hear Clare Short testifying before the Chilcot Inquiry.

When Sir John asked her if she had any comments to make on the re-evaluation of her experiences, which she had described with some candour, she said that she thought that her old Department of International Development had not been adequately involved; that the machinery of Government ‘has broken down quite badly’; and that the role of the Attorney General must be adjudged unsafe following his various pronouncements on the legality of the war. But then she added a fourth comment, braver than all the others, which broke new ground for the Inquiry. The fourth problem, she said: “is about the special relationship. We really need a serious debate in our country about what we mean by it, whether it is unconditional poodle-like adoration and do whatever America says, or whether we have bottom lines and we sometimes agree and we sometimes don’t and we use our influence responsibly, and I think we have ended up humiliating ourselves and being a less good friend to America than we could have been if we had stood up for an independent policy.

But that’s a bigger question, because you should see, when America asks for something, the Prime Minister and the Chancellor all get terribly excited and love America asking us to do something, and we really need to rethink that.

Kurt Is up in Heaven Now – Kurt Vonnegut

The Spokesman 108 is available to BUY ONLINE